Does fashion shape your identity? Can you express yourself through fashion, and if yes, how? Or does your identity shape the fashion that you’re following? It has always been like that – people dressed in styles that matched their personalities, and this trend is definitely here as well. Even though bold styles are considered as mainstream now (such as the hipster style that was unique during the first few years of the 2010s and eventually became quite popular), there are other styles that can shape our persona and help us show who we are. This is even more important if we are members of the LGBT community, as the stakes are higher, and it’s much more important for us to actually feel like we belong somewhere. And there are so many people who feel isolated, but fashion can help them find their way back. So, how can you shape your identity through fashion?

Don’t Care About What Other People Are Saying

This is the first rule that you should follow. It doesn’t matter what your age is, what your sex is or what other people are saying about you – follow the fashion that you want to follow and dress in the clothes that you like. This is one of the main reasons why people feel unfulfilled – as they cannot express themselves through clothing. Where does this happen more often? In the LGBT world, of course, especially when guys who want to dress like girls and vice versa are concerned. The androgynous style is slowly starting to become popular, but until now it wasn’t considered as popular, and many people were judgmental towards it. This is why everyone should dress the way they want to. Are you a boy who wants to wear high heels? Don’t care what others are saying, do so. Are you a girl and never want to wear a skirt? Feel free to throw them away. The happiness inside is what matters.

We’ve come to the point when the actual brand we’re wearing is very important. And what happens to all the people who simply cannot afford those brands or they don’t find them pretty enough to wear? This puts so much pressure on the youth today that many run to this new trend of logo mania even though they would rather work another style. However, not all good brands have their logos all over the place. There are amazing companies, such as Realization clothing, that produce amazing pieces – also quite retro and popular for both girls and LGBT members who want to dress in this way. So you don’t have to break the bank for a brand that’s popular only because of its name. Never let a brand form your style; you form it by yourself around the brands that you believe in and love.

It’s very important not to mix the androgynous style with unisex pieces of clothing. The former is the style in which guys and girls all over the world try to be somewhere they are deep within, most commonly by wearing clothes of that particular sex. However, you don’t have to rock the androgynous style in order to buy unisex pieces. But the line between unisex and clothes for guys and girls is practically very small nowadays. However, most popular brands produce clothing items that can be perceived as unisex, but it all depends on the person wearing it. Can you rock that outfit?

To sum up – yes, it is possible to shape your identity through your style, but you need to be proud of it and never pay attention to what anyone says. Simply be happy with what you’re wearing. If you’re feeling comfortable in your own clothes – who’s to say that you shouldn’t be? 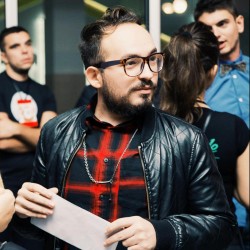 Peter Minkoff
Editor at High Style Life
Peter is a lifestyle writer for TheGayUk magazine from Brisbane, Australia! He worked as a fashion stylist and also as a freelance writer for few local magazines in Brisbane. Beside writing, he loves shopping, cooking exotic meals and traveling around tropical destinations with his hubby Josh. His future plans are in creating his personal lifestyle blog about everyday life-saving tips. Follow Peter on Twitter.
https://twitter.com/MinkoffPeter

More from my site

About Peter Minkoff 21 Articles
Peter is a lifestyle writer for TheGayUk magazine from Brisbane, Australia! He worked as a fashion stylist and also as a freelance writer for few local magazines in Brisbane. Beside writing, he loves shopping, cooking exotic meals and traveling around tropical destinations with his hubby Josh. His future plans are in creating his personal lifestyle blog about everyday life-saving tips. Follow Peter on Twitter. https://twitter.com/MinkoffPeter

Are You Ready For Your Tomorrow?

Get Yourself Tested For HIV

I also write for: